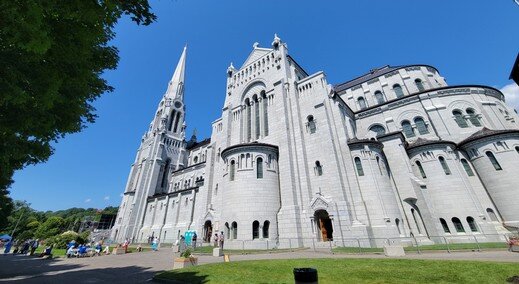 Walking together
Pilgrimage to the shrine of Sainte-Anne-de-Beaupré during Pope Francis' visit to Canada.
Text and photos by Father Reegan Soosai, c.m.f.

It was quite a challenge, to organize a pilgrimage of this magnitude during my holidays in addition to dealing with a time zone difference of 9 hours and 30 minutes. However, we succeeded and everything was set up by the grace of God. In response to one of the calls to action of the Truth and Reconciliation Commission to the Church, the destination chosen for Pope Francis' 37th Apostolic Journey was Canada. He came here with the purpose of issuing a sincere apology, in person, to the Indigenous peoples, on their own land. He responded to call to action number 58.
Photo of the group of pilgrims from our region 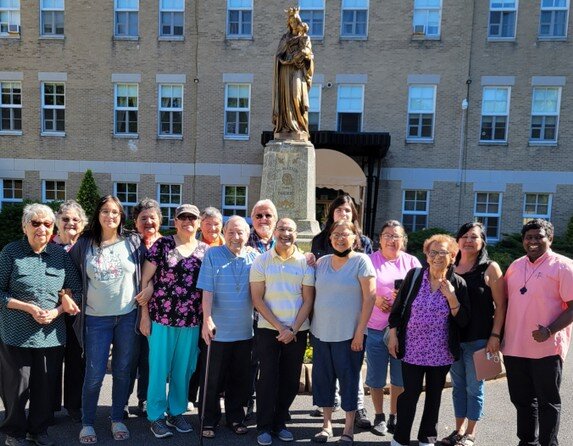 With a group of twelve pilgrims (three people from Saint Kateri Mission, Timiskaming First Nation, and nine people from the Saint Ann Mission of Winneway) we made our pilgrimage of more than 1000 km to the sanctuary of Saint Anne de Beaupré on July 27, 2022 (our starting point was New Liskeard, Ontario). We learned that there was also a group of twelve pilgrims from the Saint Clothilde Mission in Kitcisakik.
On July 28, we participated in the Mass celebrated by Pope Francis at the Shrine of Saint Ann. In his homily, the Pope reiterated his apologies and invited everyone to walk together on the path of hope, healing and reconciliation. For the pilgrims, it was an experience full of grace and joy to be in the sanctuary with the Pope and other indigenous pilgrims and to actively participate in Mass.
Father Reegan, Father Luc and pilgrims 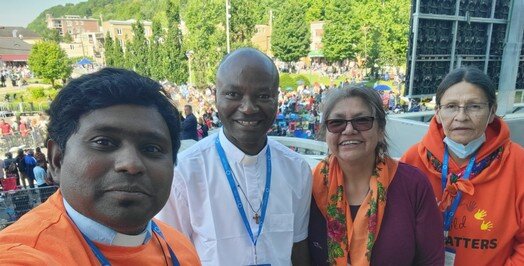 We would have liked to have seats reserved for us, but it didn't happen and we were a bit scattered and sad. Some Claretian Missionaries and Father Luc Ngonda-Nkoy Losalia were also with us. We had the chance to meet with the Premier of Quebec, François Legault, and the Prime Minister of Canada, Justin Trudeau, before the beginning of Holy Mass. There were about 1,200 people inside the sanctuary and it was a mixed population, indigenous and non-indigenous. There were about 5,000 to 6,000 people outside the sanctuary.
Prayer of Pope Francis at the tomb of Saint Francis of Laval 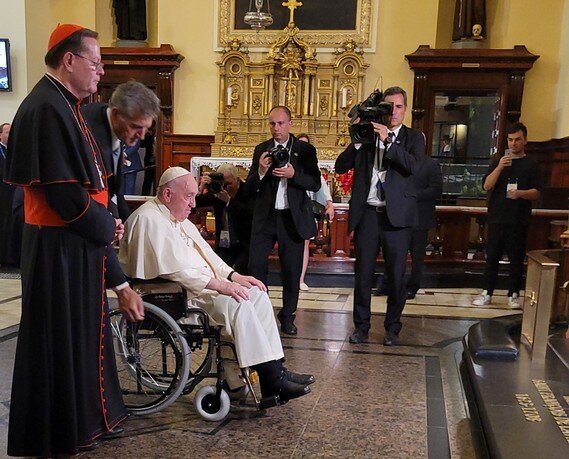 In the evening, Father Luc and I had the opportunity to participate in the Liturgy of the Hours (Vespers) in the company of Pope Francis. It was a very moving experience because we had the opportunity to see him up close as he prayed at the tomb of Saint Francis of Laval, the first bishop of Quebec. The pope's message came out as one of the best of his entire apostolic journey to Canada. In his message, he apologized for the sexual abuse of minors in Canada for the first time during his visit. He said that three women inspired and accompanied him during his journey: the Blessed Virgin Mary, Saint Anne and Saint Kateri Tekakwitha.
The Pope began his apostolic visit in Edmonton, then went on to Quebec and ended his visit to Iqaluit, which allowed him to show his closeness and reiterate his apologies to all the Indigenous peoples of this land called Canada: Inuit, First Nations and Métis Nation. On site, in Sainte-Anne-de-Beaupré and Quebec City, we had the opportunity to meet our Bishop Guy Boulanger and other bishops and it was a blessing for us.
Our encounter with Father Rémi Cadieux o.m.i 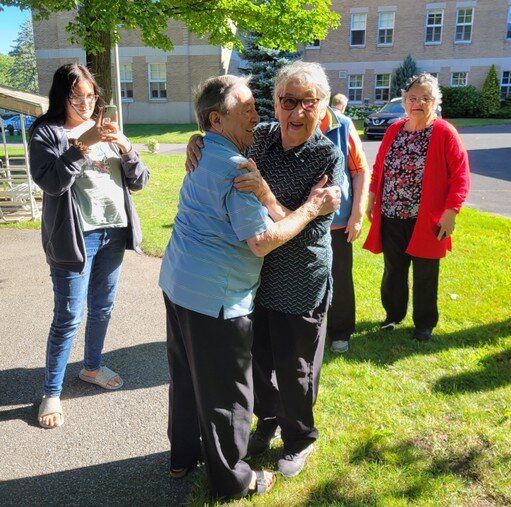 On the way back, we had the opportunity to meet Father Rémi Cadieux o.m.i who had worked for nearly 36 years among the peoples of the Timiskaming First Nation and Long Point First Nation. He was full of joy and emotion in seeing us and it was likewise for us.
The Pope used several words in his messages that we should keep in our hearts to meditate on them and continue to walk together: Memory, forgiveness, grandparents, history, multiculturalism, inclusion, healing, hope, reconciliation, youth, culture, future, truth, justice, God's grace and working together.
He also mentioned some images and objects in his messages: Moccasins, tree, teepee, drum beats, water, Indigenous costume, fleur-de-lis, maple leaves, stars, GPS and ice hockey.
Father Luc Ngonda-Nkoy Losalia and Mgr Guy Boulanger 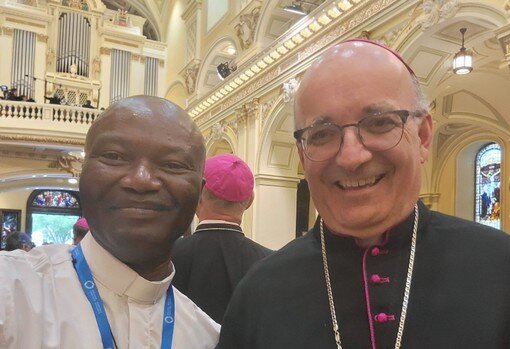 We wish to thank our dear Bishop Guy Boulanger (for his valuable advice in organizing this pilgrimage) as well as the Claretian Missionaries of Victoriaville, Fathers Percy Diaz and Vincente, for their hospitality, kindness and generosity in preparing and providing the rooms, breakfast and snacks for all of us. We thank the Long Point First Nation group for arranging our charter bus transportation (free of charge) thus sharing with us the federal grant received for the Pope's visit.
Let us continue to implore the grace of the one God and Creator so that we can continue to walk together with openness, humility, fraternity and solidarity..
In closing, here are two testimonials from participants in our voyage :

Pope Francis’ visit gave me an opportunity to strengthen my own faith, bringing me closer to God in a way I can’t explain. I didn’t get to see our Holy Father up close but I was able to attend the Mass inside St. Anne de Beaupré Shrine. I feel this visit is a positive step toward healing for indigenous people. As a Catholic community member and an Indigenous person, I do feel very blessed to have had the opportunity to participate in this pilgrimage. Thank you, Father Reegan and all others, involved for organizing this trip.

Louise Ruttan
As for myself it was a very great experience, I feel so blessed when the pope came to our native land, thanks for everything and now it’s up to the residential people to accept his forgiveness and move on in life, I have nothing against other religious people because we’re all in this together.
Marie Connie O'Gushing